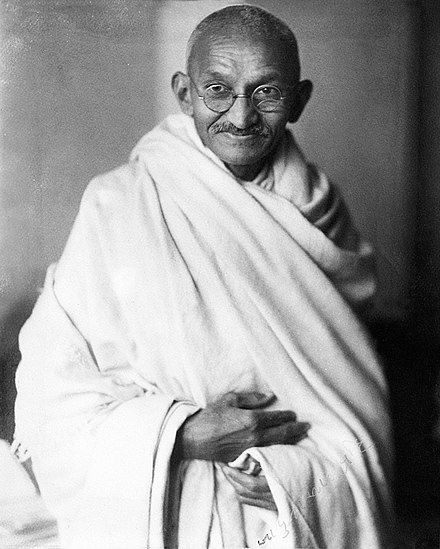 He was an Indian activist who was the leader of the Indian independence movement against British colonial rule.
Employing nonviolent civil disobedience, Gandhi led India to independence and inspired movements for civil rights and freedom across the world.
The honorific Mahātmā (Sanskrit: "high-souled", "venerable") was applied to him first in 1914 in South Africa and is now used worldwide.
In India, he was also called Bapu, a term that he preferred (Gujarati: endearment for father, papa), and Gandhi ji, and is known as the Father of the Nation.
Born and raised in a Hindu merchant caste family in coastal Gujarat, India, and trained in law at the Inner Temple, London, Gandhi first employed nonviolent civil disobedience as an expatriate lawyer in South Africa, in the resident Indian community's struggle for civil rights.
After his return to India in 1915, he set about organising peasants, farmers, and urban labourers to protest against excessive land-tax and discrimination.
Assuming leadership of the Indian National Congress in 1921, Gandhi led nationwide campaigns for various social causes and for achieving Swaraj or self-rule.

Serenity is when what you say, what you think, what you do, are in perfect harmony.

If you scream, everyone hears you, if you only whisper who is close, but if you are silent, only those who love you listen to you.

Be the change you would like to see happen in the world.